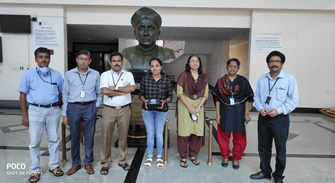 "The project was on developing low cost handheld Raman spectrometer for automated analytical and diagnostic applications. The project was supported under the PAIR scheme jointly by KSCSTE, M/s.VINVISH TECHNOLOGIES (P) Ltd, Thiruvananthapuram and CSIR- NIIST, Thiruvananthapuram. The invention has many applications in the pharmaceutical sector including quality testing of ingredients of medicines, detection of fraudulent products and in healthcare sector for disease diagnosis through detection of biomarkers and pathogens."

Research Fellow: Smt. Keerthy Vijayan, KFRI, Peechi, Thrissur The study envisages the identification of snail (Achatina fulica) infested sites in Kerala, screening the presence of Angiostrongylus cantonensis in the populations of Achatina fulica and the role of them in causing eosinophilic meningitis in humans. A total of 276 Achatina fulica (Giant African snail) infested sites were identified in Kerala for the first time. Of this, 16S rRNA gene sequence of 208 snails were isolated. From the 16s rRNA sequences, it was identified that the snail population in India has originated from Mayotte and Mauritius islands. The wood import data from the Cochin port also suggests that large quantity of timber is imported from Indian ocean islands. Till date the Giant African snail is not considered as a quarantine species. So this result will be helpful in adding the species into the quarantine list and limiting its further entry into India. This study make use of the molecular markers for tracking the invasion of a potential invasive species. The nematode Angiostrongylus cantonensis causing Eosinophilic meningitis in human which is present in the snail is not yet identified from India. This study also identified the nematode from the snail mucous morphologically. Molecular identification is being done. This identification of the nematode in snail populations of Kerala shows the importance of the spreading of the worm through the highly invading movement of the snails.

Government of Kerala, through KSCSTE had initiated the Karamana River Scientific Management (KRSM) (Pilot) Project as an integrated and co-ordinated one to mitigate pollution of Karamana–Killi River in the Thiruvananthapuram City area. Sub-projects, relevant to the objective are identified; referring to scientific studies (Study Report by RITES 2013), media reports, expert suggestions and committee decisions. Prime importance is given to select works related to infrastructural developments, having sustainable impact on pollution mitigation. Infrastructure developments related to diversion of sewage to STP, sewage pumps at Kuriyathi Pumping Station, prevention of solid waste dumping by erecting chain linked fencings along the bridges, erection of incinerator and bio-gas plant, development of dhobighat, balikadavu and walkways along the river bank, development of bio-parks and play parks, construction of check dam. installation of surveillance cameras along the river bank, tree plantations through people’s participation. Parallel to this, importance is also given to awareness and peoples participation activities. Awareness and sign boards are installed in strategic locations so as to educate the public about the importance maintaining the river water clean and pristine.

Drug delivery using a nanocarrier is one promising approach for cancer therapy. However, the design of nanocarriers that allow the targeted delivery of drugs at the desired location upon demand remains a foremost challenge in cancer therapy. Herein, the design of a DNA based vesicle (DNAsome) as a nanocarrier from the self-assembly of a DNA amphiphile is reported. The salient features of DNAsome include excellent biocompatibility, high drug encapsulation ability and DNA-based surface addressability. The surface decoration of the DNAsome with highly information-rich ssDNA is explored for the integration of cancer cell targeting aptamer through sequence specific DNA hybridization. Selective delivery of anticancer drug into a cancerous cell line is demonstrated using the aptamer decorated DNAsome in an efficient manner. The results unequivocally show the potential of DNAsome for targeted cancer therapy, and hence could be a promising candidate as a nanocarrier for drug delivery applications.

By means of co-electrodeposition, we fabricated 3D assembly of Pt nanostructures with dominant (100) plane on reduced graphene oxide (rGO) modified graphite electrode. The nanostructure was found to be highly durable and this modified electrode exhibited high electrocatalytic activity towards methanol oxidation. rGO-Pt composite deposited using one cycle showed a high mass activity of 2.54 A/mg at 0.67V for methanol oxidation in acidic condition and 1.84 A/mg at -0.03V in alkaline medium. The work was resulted in a publication in International Journal of Hydrogen Energy Impact factor: 4.229, which received 25 citations In the next attempt to reduce the loading of costly Pt, we developed a new coral like structure of Pd and galvanically deposited Pt on that. The Pt incorporated palladium nanocoral (PdNC-Pt) structure reported showed enhanced performance towards MOR and ORR than palladium nanocoral (PdNC) and commercial catalysts Pd/C and Pt/C. The enhanced efficiency of the catalyst with very low loading of Pt (0.43 µg cm-2) is the highlight of this work. This low loading of Pt will reduce the cost of the catalyst and hence the fuel cells significantly. This work was published in Electrochimica acta (Impact factor 5.383)

Keeping in view the emerging trends in modern scientific research, KSCSTE and KFRI have jointly established a “Centre for Analytical Instrumentation - Kerala (CAI - K)” with an assemblage of sophisticated analytical instruments at KFRI, Peechi. The facility is catering to a wide range of researchers, students, government and non - governmental institutions in sophisticated analyses and instrumentation training. The Centre was actively involved to a) Create an assemblage of high-end sophisticated instruments for the use of researchers, academicians and other interest groups and b) Conduct training programmes on analytical instrumentation. A number of samples for routine analysis was received during the period. The total number of samples analysed were close 1300 and an income of 04.50 lakhs was generated during the period (April 2019 - March 2020). In addition, a water quality analysis lab was started during the period for the analysis of potable water quality including physical, chemical and biological parameters. Presently the facility is mainly used for the water quality analysis requirements of the projects executed in KFRI, however it’s open to general public on payment basis.

Breast cancer detection is an important social requisite as it is the leading cause of death due to cancer among women. The early detection & treatment are the only means to reduce breast cancer related deaths. Mammography is the main radiological tool that is employed for identifying breast cancer at the earliest stage. The presence of tumours in less contrast and dense mammographic images makes the detection difficult and to discriminate between solid masses and cystic masses employing mammograms alone. Using Ultrasound images cystic and solid masses can be distinguished. Therefore breast ultrasound is often suggested as an adjunct to X- ray mammography when breast cancer is suspected Three problems are addressed in this project: Delineation of the Pectoral Muscle region by properly identifying the pectoral muscle boundary, Detection of Architectural distortion and identification of tumor location in the breast ultrasound images. Two novel methods were developed for identifying the Pectoral Muscle boundary from Mediolateral Oblique view mammograms that employed multiscale decomposition and local segmentation. Then the Breast area is extracted following the removal of the Pectoral muscle region and the breast abnormalities are searched for. Architectural Distortion is the most commonly missed abnormality in mammograms. A novel method for detecting Architectural distortion is proposed in this project that employs geometrical features obtained from selected edge structures in the mammographic image. These features are used to train a Feedforward Neural Network classifier initialized using metaheuristic algorithms for better classification. All algorithms are evaluated against similar works from current literature and the results are promising. The standard databases, the Mammographic Image Analysis Society database (MIAS) of the University of Sussex, UK, and the Digital Database for Screening Mammography of the University of South Florida, USA were employed to evaluate the algorithms. Ground truth information is provided in both databases for all images. Since in India, breast cancer is often found at a younger age, a study on a cross section of the Indian populace, with quite a good number of dense mammograms, was also undertaken. In this project, an automatic technique is applied to detect the seed points representing the actual tumor region in two dimensional breast ultrasound (BUS) images. The method is based on identifying the homogeneous regions in the BUS image and then analyzing it with a multiscale wavelet transform to identify the modulus maxima points representing the tumor region. The tumor seed points are then extracted from the modulus maxima points using the tumor likelihood of the detected seed points. The proposed method suggests new techniques to identify the tumor location in the breast ultrasound images. This result can be used in extracting the tumor regions in order to detect the type and extend of the breast cancer.

South Indian Dharuharidra, Coscinium fenestratum is a largely exploited species; overexploitation, slow growth, dioecious nature and fewer numbers of female plants leads to the drastic decline of population in wild. Mature population of this highly habitat specific species is observed only in a few localities of evergreen forests in the entire Western Ghats region. Since the woody stem is used for drug preparation, destructive harvesting, etc. affects the seed production. Mature population is observed in a few localities and in all the localities low frequency of juvenile or pre-reproductive phases is met with. Above 3000 individuals were observed during the field surveys. Out of these, only around 200 were mature individuals. The most threatening feature of this species is the fewer number of female plants. In all over Kerala, the total number is less than 50 and fruiting and flowering are also not uniform. Since seed availability is low and is orthodox in nature, natural regeneration is very poor or effectively absent. As part of its restoration, a programme was implemented during 2013-2016 in collaboration with Kerala Forest Department with the financial support of National Medicinal Plants Board. Though the seed availability is low, we could develop 14,500 seedlings and restored them in the selected microhabitats of Vazhachal Forest Division. Though we have developed vegetative propagation techniques, priority was given to the propagules which were raised from the seeds, since the restoration was in natural habitat (to maintain the minimum genetic equilibrium). After the third year of planting, a record survival rate of 93 % was observed. This was one of the most successful programme in this category. Scientific approach on propagules development and selection of restoration site was the major factor in this success story. In the light of this success, the agencies had upscaled the programme into more areas, since the demand of this species is very high. This programme could lead the conservation of this species and also helps to meet the demand in future.